Find this article at:
go.ncsu.edu/readext?865973
— Written By Sara Villani 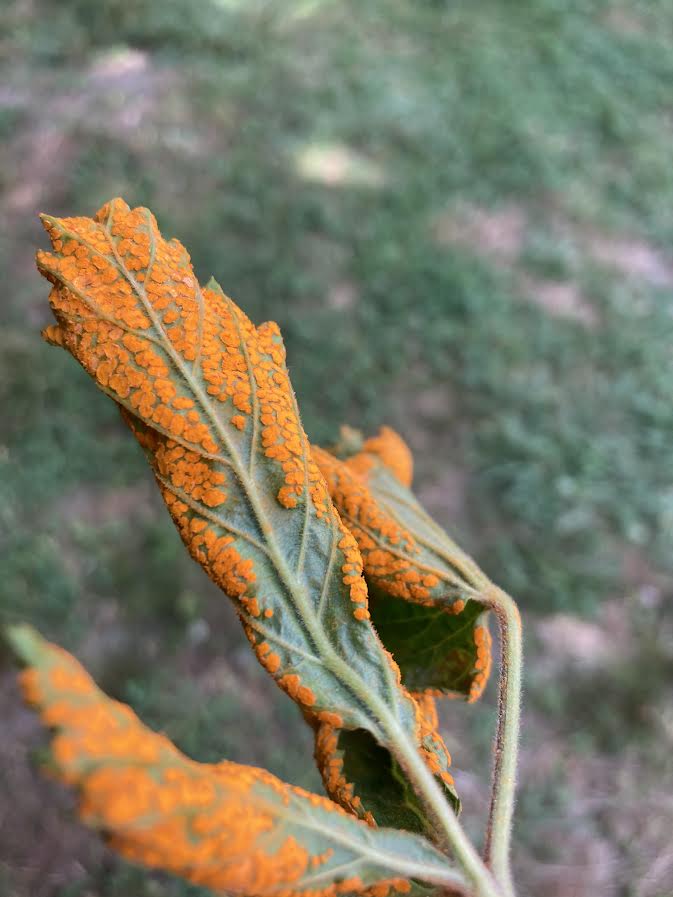 Orange rust has arrived with a vengeance this year and unfortunately symptoms are not always as obvious as on the wild blackberry pictured above. For those not as familiar with the disease, orange rust is caused by two fungal pathogens that cause systemic infection throughout the blackberry. While the telltale sign of this disease are bright orange pustules called aecia on the leaf underside, other signs and symptoms indicative of systemic infection include:

Sources of orange rust in established plantings often come from wild brambles along wooded edges. Last year I was visiting a commercial orchard in Henderson County, monitoring for ambrosia beetles along a wooded edge, and came across several infected blackberries which likely would have led to a localized outbreak had the grower planted susceptible blackberries nearby. Thus, if you have an established planting and suspect orange rust be sure to scout the wooded edges along your plantings to possibly identify a local inoculum source. Unfortunately, removal of wild blackberries within a 0.25-mile radius is suggested, which may not be a reasonable strategy.

This season, we have received alerts from Extension agents and growers who have opened up their shipment of new plants only to find their blackberries have orange rust. The most recent was on a shipment of Apache. This should certainly serve as a wake-up call to inspect all plants prior to planting and notify an Extension Agent or a member of the Rubus team here at NC State if you suspect orange rust or any other issue with a shipment of blackberry plants.

Somewhat alarmingly, Apache is a cultivar that we consider to be resistant, or at least quite tolerant to orange rust. Other cultivars that have historically had this tolerance level include Cherokee, Cheyenne, Comanche, Ouachita, and Osage. This breakthrough on Apache may be suggestive of a more virulent strain popping up, but certainly, research is warranted before we head down that path.

In regards to management, once a plant is infected systemically there’s not much that can be done to cure or save it. While we currently have more fungicides at our disposal than ever before, unfortunately very few are truly systemic in nature. In established plantings, if orange rust is confirmed, I would encourage you to remove the plant down to the roots (remember, roots can also become infected) and bag the plant on the spot. Moving the plant throughout the field you risk dispersing spores or other infectious material. Once the plant is removed, I would suggest you apply a herbicide in an attempt to destroy any small roots left behind or at the very least consider burying the roots to mitigate the dispersal of any infected tissue. Consider also removing adjacent plants as those may also be infected but be asymptomatic.

Prior to removal (best) or just after removal (still a good move) apply a fungicide to protect plants that don’t appear to be infected. The DMI (FRAC 3) fungicides such as Rally 40WSP or Tilt or strobilurin fungicides (FRAC 11) such as Cabrio EG or Pristine should provide excellent protection. If you suspect wild brambles are a source of infection but you cannot remove or identify their location, consider commencing applications at 6-inch shoot growth and continuing through the harvest period.

We also have a few other email lists you can subscribe to.