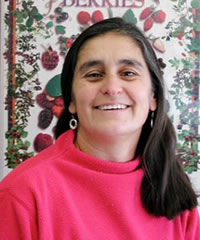 Dr. Gina Fernandez, Department of Horticultural Science, has led the raspberry and blackberry breeding program at N.C. State University since 2004. Fernandez sees exciting times ahead for both small fruits for a number of reasons. First, the health benefits of both berries rival that of the blueberry, long considered a “super fruit.” She says consumption of the blackberries and raspberries is already increasing, and the strengthening local foods movement will only bolster their popularity.

In addition, breeders like herself are developing new varieties of both berries and trying to strengthen existing varieties. Paired with new production systems, the new varieties could make the berries available year-round.

Fernandez is now testing berries in high-tunnel production systems at research stations in Salisbury, N.C. (the Piedmont) and in Mills River and Laurel Springs, N.C. (the mountains) to see if this protected method can address some of the traditional drawbacks in production of each berry. While evaluating the production systems of blackberries and raspberries, Fernandez is also conducting breeding trials for larger, more flavorful pest-resistant berries that demonstrate a good shelf life.

In 2007, Fernandez and Dr. Jim Ballington, N.C. State’s raspberry breeder before handing the program to Fernandez, applied for a U.S. plant patent for ‘Nantahala’, a first-year fruiting red raspberry adapted to the high elevations of western North Carolina.

Fernandez holds several training sessions for Extension agents and producer groups annually. She has presented at workshops about season extension of blackberries and raspberries, organic production of small fruits, blackberry production a-z, virus issues in blackberries and raspberries, planting and pruning of small fruits and alternatives to methyl bromide.

Fernandez has also participated in many international educational efforts including small fruit trials in Bolivia and Mexico, agent training in Ethiopia and an effort to strengthen organic production and marketing in Uruguay. At an international symposium in Pucon, Chile, in 2008, she and Ballington spoke about their efforts to breed raspberries for warm humid climates with fluctuating winter temperatures.